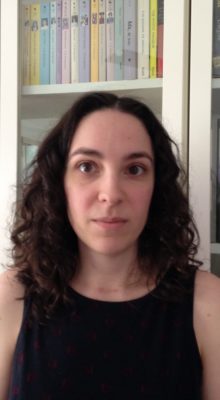 Gianna Ward-Vetrano earned her B.A. in Italian from Georgetown University and her M.A. in Liberal Studies from the Graduate Center, City University of New York, where she studied gender, sexuality, and women’s studies. Her master’s thesis was a feminist, multi-genre project that sought to examine the figure of the woman writer in a series of notebooks and was written under the advisement of Wayne Koestenbaum. Her scholarly interests include 20th century Italian, French, English, and Canadian literature by women writers, especially Clotilde Marghieri, Grazia Deledda, Mary Webb, and L.M. Montgomery, feminist theories, and translation, with a special emphasis on Italian voices underrepresented in English. Her work explores theoretical and literary experimental structures and spaces and her particular obsessions are feminist domesticity, the female voice, memory as a literary form, and developing a feminist politics of failure. She has also done research at the intersection of feminism and the study of fascist and anti-fascist politics, focusing on Benito Mussolini’s first wife, Ida Dalser, as well as Simone Weil and Antonio Gramsci.

As a lyric soprano, she studied opera with Victoria Cole, Viviane Thomas, and Patricia Misslin and performed in Pittsburgh, Boston, and Le Marche, Italy. She has written a blog, The Unbearable Bookishness of Blogging (www.unbearablebookishness.com), since 2013 and her fiction has appeared in Scoundrel Time and THAT Literary Review. She is the 2018 recipient of the Julia Keith Shrout Short Story Prize.