Tom McEnaney works on the history of media and technology, Argentine, Cuban, and U.S. literature, sound studies, linguistic anthropology, computational (digital) humanities and new media studies. He holds a joint appointment in the Department of Spanish & Portuguese and serves on the Executive Committee of the Berkeley Center for New Media, and the Executive Board of UC Cuba. He is also affiliated with the Program in Critical Theory, the Center for Science, Technology, Medicine and Society, and the Data Science Lab (D-Lab).

Professor McEnaney's work has appeared in diacritics, La Habana Elegante, The Journal of Musicology, PMLA, Public Books, Representations, Revista de Estudios Hispánicos, Sounding Out!, and other venues. His book, Acoustic Properties: Radio, Narrative, and the New Neighborhood of the Americas (FlashPoints at Northwestern University Press, 2017), which was shortlisted for the 2018 Modernist Studies Association's First Book Prize, investigates the co-evolution of radio and the novel in Argentina, Cuba, and the United States. The book charts the rise and fall of populism and state socialism, and how authors in these countries began to re-conceive novel writing as an act of listening in order to shape the creation and understanding of the vox populi.

His research on voice, sound, and identity has appeared in The New York Times, KQED's Forum Program, Oakland Magazine, and elsewhere.

From 2020-2023, Professor McEnaney is a Mellon New Directions Fellow with an emphasis in cultural analytics. He is also at work on a book about textual and musical experiments with tape technology in the late 1960s and their consequences for testimonial writing, rock nacional , electronic music, and audiobooks in the Americas. Before returning to Berkeley, he was an Assistant Professor in the Department of Comparative Literature at Cornell University. While at Cornell, Professor McEnaney also founded the Latin American Journals Project, an online archive and hub of digitized literary journals and newspapers from throughout Latin America and the Hispanophone Caribbean. The aim of this project is to increase access to and work with these extraordinary journals for people across the world. (Ph.D., University of California, Berkeley). 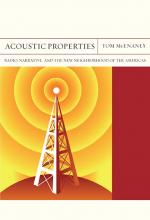