Robert Alter and his new translation of the Hebrew Bible 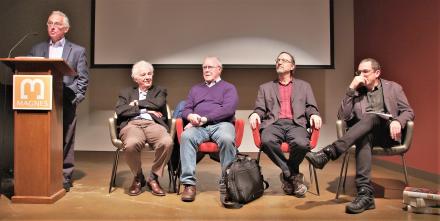 Robert Alter, Berkeley Professor ... of Hebrew and Comparative Literature, chooses his words carefully—in conversation and in writing. Wednesday’s panel at the Magnes Center in Berkeley celebrated Alter’s latest feat—north of 3,500-pages and decades in the making—a decidedly literary translation of the Hebrew Bible into English.  Dean and Comparative Literature professor Anthony Cascardi introduces the august panel consisting of English Professor and poet Robert Hass, Professor of Near Eastern Studies and Hebrew scholar Ronald Hendel, and Professor of History and Religion Jonathan Sheehan.

Alter’s fidelity to the texture and color of the source text, to the occasional “weirdness of the Hebrew”—qualities often lost in rigidly literal translations—is obsessive. Recreating cadence and alliteration, handpicking English words which evoke the complexity and nuance of the Hebrew—these are paramount, where it is possible.

Alter approaches the Bible as a piece of literature. Accordingly, his translation draws forth the humanness of the characters, who are not uniformly and incessantly intrepid and heroic, with vocabularies and deliveries to match—but who on occasion speak colloquially or callously, who sometimes stutter before the fury of some higher authority.

Videos of the February 13th, 2019 event are available here.