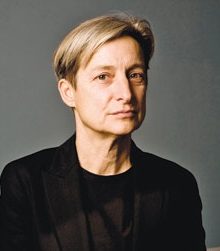 Distinguished Professor in the Graduate School

Judith Butler is Distinguished Professor in the Graduate School and former Maxine Elliot Profess in the Department of Comparative Literature and
the Program of Critical Theory at the University of California, Berkeley. They served as Founding Director of the Critical Theory Program as well as the
International Consortium of Critical Theory Programs at UC Berkeley, funded by the Andrew Mellon Foundation. They received their
Ph.D. in Philosophy from Yale University in 1984. Books include Subjects of Desire: Hegelian Reflections in Twentieth-Century France (1987),
Gender Trouble: Feminism and the Subversion of Identity (1990), Bodies That Matter: On the Discursive Limits of “Sex” (1993),
The Psychic Life of Power: Theories of Subjection (1997), Excitable Speech(1997), Antigone’s Claim: Kinship Between Life and Death(2000),
Precarious Life: Powers of Violence and Mourning (2004); Undoing Gender (2004), Who Sings the Nation-State?: Language, Politics,
Belonging (with Gayatri Chakravorty Spivak in 2008), Frames of War: When Is Life Grievable? (2009), and Is Critique Secular? (co-written with
Talal Asad, Wendy Brown, and Saba Mahmood, 2009) and Sois Mon Corps (2011), co-authored with Catherine Malabou. They also published
Parting Ways: Jewishness and the Critique of Zionism (2012), Dispossessions: The Performative in the Political co-authored with Athena Athanasiou (2013),<br />
and they co-edited Vulnerability in Resistance (Duke University Press, 2016). Senses of the Subject (2015), Notes Toward a Performative Theory of Assembly (2015),
The Force of Nonviolence (2020) and What World is This? A Pandemic Phenomenology (2022). Their books have been translated in 27 languages.
In 2024, they will publish a book on the anti-gender ideology movement. Future projects include a study on the loss of human form in Kafka's world of
indefinite detention.

They have been active in gender and sexual politics and human rights, anti-war politics, serves on the<br />
advisory board of Jewish Voice for Peace and their committee on Academic Freedom as well as<br />
the Advisory Council of The New University in Exile at the New School University and the<br />
board of the Center for Constitutional Rights. They served as the President of the Modern<br />
Language Association in 2020 before which they served as chair of the Committee for Academic<br />
Freedom and Professional Responsibilities (2013-15). They served on the board of the Institut<br />
fuer Sozialforschung in Frankfurt and the Spinoza Prize in Amsterdam. They are affiliated faculty at the Psychosocial Studies at<br />
Birkbeck College and the Hannah Arendt Chair at the European Graduate School in<br />
Switzerland. The recipient of the Catalan International Prize for Contributions to Humanity (2022), the Andrew Mellon Award for Distinguished Academic
Achievement in the Humanities (2009-13) and the Adorno Prize from the City of<br />
Frankfurt (2012), the Brudner Prize from Yale University and the Kessler Prize from CUNY for lifetime achievement in gay and lesbian studies, and the Research
Lecturer honor at UC Berkeley in 2005, they have received numerous other grants as well, including Guggenheim, Rockefeller,<br />
Ford, American Council of Learned Societies, and was selected as a Fellow at the Institute for Advanced Study at Princeton and at the College des Hautes Etudes in Paris. They received<br />
honorary degrees from Université Bordeaux-III, Université Paris-VII, Grinnell College, McGill<br />
University, University of St. Andrews, Université de Fribourg in Switzerland, Universidad de Buenos Aires in Argentina,
Universidad de Costa Rica, Universidad de Vercruzana, Université de Liége in Belgium, Universidad de Chili, Universidad de Guadalajara, Belgrade University,
and became an Honorary Fellow at Birkbeck College, University of London in 2021.
In 2013, they were awarded the diploma of Chevalier of the Order of Arts and Letters from the French Cultural<br />
Ministry and recently renamed a Commandant. In 2015, they were elected as a corresponding fellow of the British Academy<br />
and in 2019 to the American Academy of Arts and Sciences. In 2022, they received the Gold Medal from the Circulo de Belas Artes
in Madrid.
They have served as founder and director of The International Consortium of Critical Theory Programs
and presently serves on the advisory board of Critical Times as co-chair of its Board. In 2021 and 2022.,
they teach part-time as Visiting Distinguished Faculty in Philosophy at the New School University.

Please note that these are courses in the Department of Comparative Literature only and do not include possible courses in other departments.