“The Critique of Coloniality: Eight Essays” – A New Translation

“The Critique of Coloniality: Eight Essays” – A New Translation 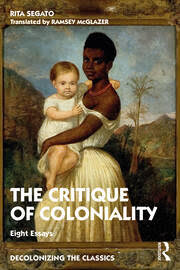 The translation by Ramsey McGlazer of Rita Segato’s seminal book La crítica de la colonialidad en ocho ensayos offers an anthropological and critical perspective on the coloniality of power as theorized by the Peruvian thinker Aníbal Quijano. This book will be of interest to students and scholars working in anthropology, Latin American studies, political theory, feminist and gender studies, Indigenous studies, and anticolonial, post-colonial, and decolonial thought.

Ramsey McGlazer is an Assistant Professor of Comparative Literature at UC Berkeley. His research centers on twentieth-century European and Latin American literature, film, and critical theory. Professor McGlazer works in Italian, English, Spanish, and Portuguese, and his interests include poetry and poetics, politics and aesthetics, and feminist, queer, and psychoanalytic theory.

Rita Segato, Professor Emerita at the University of Brasilia, is an anthropologist and feminist who has written extensively on gender, violence, the gender system in the Yoruba tradition, race, and coloniality. She is a major figure in Latin American decolonial feminism.

Marlena Gittleman is a Ph.D. candidate in Comparative Literature at UC Berkeley, with a Designated Emphasis on Gender, Women, and Sexuality. She is a translator of Spanish, Catalan, and Portuguese.

This is the first event of 2022-23 in the series Novedades/Lançamentos: New Scholarship @ Berkeley. In this space, we highlight new work from Berkeley scholars about Latin America and the Caribbean by inviting a faculty member and a graduate student to discuss the recent work of a Berkeley faculty member.